The Al Ghazali Festival is set to take place from 17th October to 27th October 2018 in Cape Town, Johannesburg and Durban. Read more about the festival and speakers here. 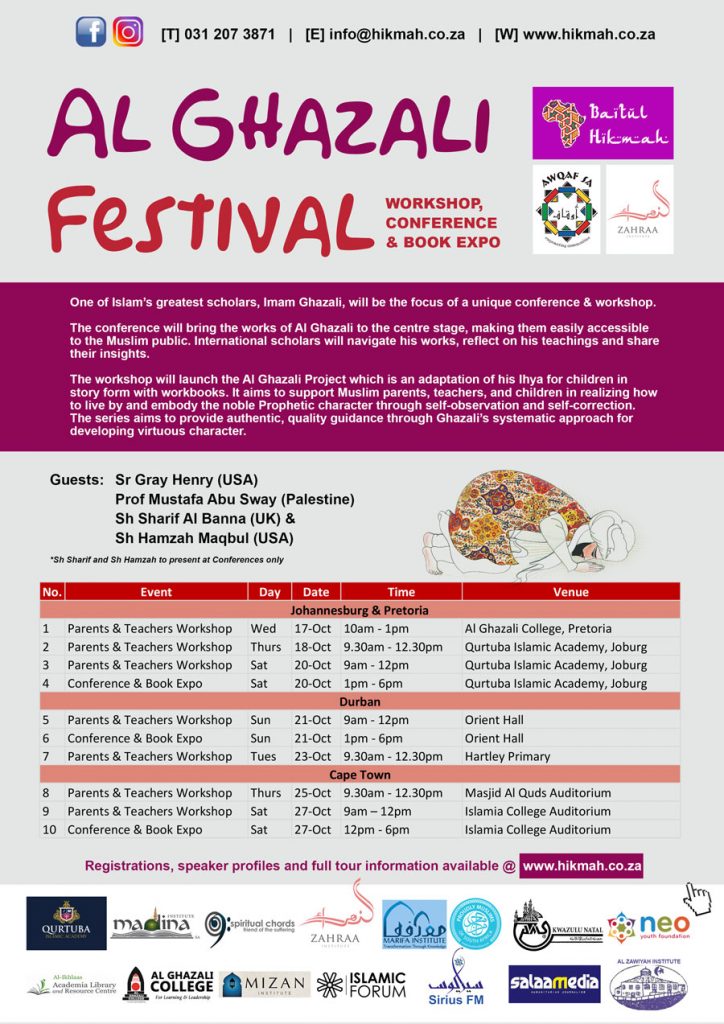 Launch of the Al Ghazali for Children Project

One of the key components of the project that is included in the tour will be the launch of the Al Ghazali for Children project championed by publishers Fons Vitae (USA).

The Ghazali Project is an adaptation of Imam Ghazali’s Ihya for children in story form, published as a series of books with an interactive website. It aims to support Muslim parents, teachers, and children in realising how to live by and embody the noble Prophetic character through self-observation and self-correction.

The series aims to provide authentic, quality guidance through Ghazali’s systematic approach for developing virtuous character. He provides the entire family with a clear and simple map for living correctly – according to one’s fitrah, one’s innate, pure, true nature.

Sister Gray Henry who is the lead coordinator of the project who will be accompanied by Prof. Mustafa Abusway will be conducting a nationwide tour including Cape Town, Johannesburg and Durban, running workshops for parents and teachers on how to implement the programme at schools or at home.

The Al-Ghazali Children’s curriculum and workbook series can be purchased online at Baitul Hikmah.

Who is Al Ghazali?

An alchemist is a person who can create gold from base metals. It is a quest as old as legend. The truth is that alchemy exists, but not of base metals, but of the human heart.

Imam al-Ghazali (1058-1111 CE) is probably one of the greatest alchemists of all time. And in an epoch where the human condition is in its direst straits, never more has there been a need for the chemistry of Imam al-Ghazali.

A theologian, jurist, philosopher, mystic and polymath, Abu Hamid Muhammad ibn Muhammad al-Ghazali is not only ranked amongst Islam’s finest scholars, but is one of mankind’s finest students of the human condition. Known as Algazel to the mediaeval world, he was born in Tus, the Khorasan province of ancient Persia.

When he had the academic world at his feet in his early thirties, he spurned fame and fortune to go into a mode of self-denial and spiritual seclusion that lasted for many years.

Already an acknowledged master of Holy Law, he re-entered society a practised Sufi – a true gnostic. A genius, Imam al-Ghazali was fully proficient in Greek and Roman philosophy, and he debunked its central tenets, proving that Revelation was always going to be superior to human reason. Human thinking could never evolve, he wrote, in an existential vacuum.

It was all of this that prompted him to write his magnus-opus, the Ihya ‘Ulumad-Din (the Revival of the Religious Sciences). It is today regarded as one of the classic works on the human psyche. In the Ihya the author explains step-by-step how to turn one’s base instincts and desires into the golden ideal.

Today’s modern world – devolved of spirituality and fraught with destructive ills such as materialism, multi-national greed and violence – is in need of people like Imam al-Ghazali. This is because Imam al-Ghazali teaches a way to balance the body and the soul, thus allowing us to reconcile modernity with spirituality in its very broadest, and most universal, sense. (Source: Dome Publishers)

The Al Ghazali Festival is set to take place from 17th October to 27th October 2018 in Cape Town, Johannesburg and Durban. Read more about the festival and speakers here.

Lives of Inspiration Series: Beyond the Prophetic Period with Sheikh Ismail Londt
July 17, 2019

[Watch] Strengthening our Pillars: “Zakah in accordance with Qur’an”
March 20, 2019